Let’s face it, most of us are gravitated to white-centered hostas as the leaf contrast in usually very striking. We all think of hostas as the indestructible, easy, no care plant. The problem with the white-centered hostas is that there is no chlorophyll in the white tissue. The white part of the hosta cannot produce food for the roots and needs to be supported by the green parts of the leaf. 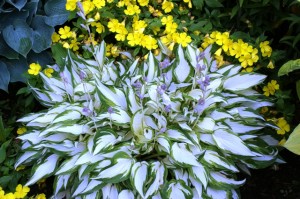 With that said you can imagine that the more white tissue in the leaf then the harder the plant is to grow. The fact is that these hostas don’t always perform as well as intended and sometimes they don’t survive. This does not mean that you should just give up on trying them but you need to understand that there are multiple factors that can aid you in your quest to grow them. The white-centered hostas will demand more light than other hostas but it wants to be indirect sun. What we mean by this is that morning sun is not as direct and hot as mid-day sun. If these hostas are sited in a bright morning sun location it helps the plant produce energy for the roots. A bright filtered sun during the day is also a good location. Too much direct sun can burn the white part of the leaf. If you have a mostly shaded location then white-centered hostas might not be what you want to plant there although there are exceptions. White-centered hostas with thicker leaves perform great in the shade garden. Examples for us are ‘American Sweetheart’, ‘Ann Kulpa’, ‘Lakeside Spellbinder’ and ‘Night Before Christmas’.

For the casual gardener these hostas can be quite a disappointment if not sited correctly but for the avid hosta grower these are treasured plants that we try multiple times in multiple locations until we get it right. We have noticed with a few white-centered hostas that patience is a virtue. We stopped selling ‘Lakeside Love Affaire’ and ‘My Child Insook’ because they performed so badly in the container and in the garden. They did not die in the ground but also did not perform well enough to demand a location in the garden. We decided to leave them in the garden and gave them extra care (water and fertilizer), by the fourth year both of them performed pretty well. The ‘Lakeside Love Affaire’ was so nice that we have brought it back into production. This picture is from our garden this year (2014). 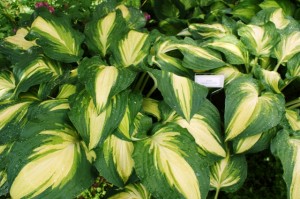 Another type of white-centered hostas that perform well are viridescent types. These hostas emerge with white but will add more green in the leaf as the season progresses which helps the plant perform better. Hostas that are viridescent are ‘Allegan Fog’, ‘Dancing Stars’, ‘Guardian Angel’, ‘Midnight at the Oasis’, ‘Whirlwind’, ‘White Christmas’, ‘White Elephant’ and ‘Zebra Stripes’. 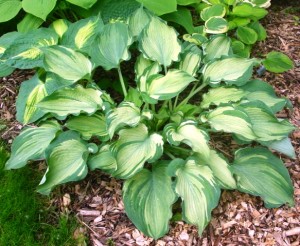 In closing, we don’t want you to be discouraged if you were thinking about growing white-centered hostas but rather be educated on what you can do to have better success. You might get a little frustrated and you might have to try multiple times but everyone should own a successful clump of Hosta ‘Andrew’! 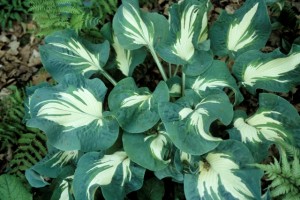