What is wrong with my hosta? Why does some of the clump look different from the rest? What are hosta sports? What is a reversion?

Here is a technical definition of a sport and a reversion.

A sport is a leaf bud in a clump of hosta that grows differently than the rest of the clump.

See the green growing in the clump of ‘Guacamole’ in the picture to the right. 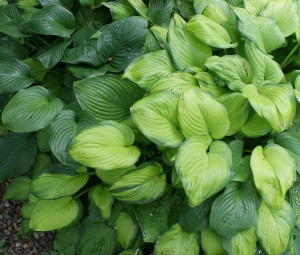 The green is not a reversion because ‘Guacamole’ is actually a hosta sport of ‘Fragrant Bouquet’. There are different types of sports as noted below.

A reversion is a leaf bud in a clump of hosta that goes back to the original mother plant. 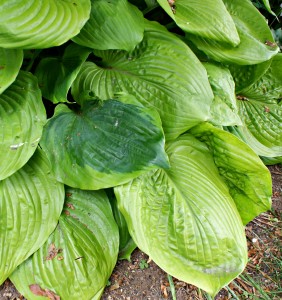 See the one dark green center of ‘Sum of All’ in the picture to the left.  The remaining leaves of the plant have reverted back to the gold of ‘Sum and Substance.’

So What Do We Do With a Hosta Sport or Reversion?

Both should be removed by using a knife and cutting the bud off of the clump. The best way to do this would be to lift the whole hosta and separate all the unwanted divisions, then reset the original hosta.

These hosta sports and reversions can be kept if they are wanted and grown somewhere else in the garden.