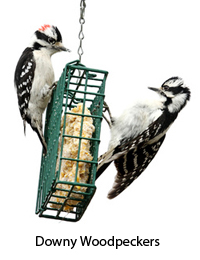 Late last winter I found an unused suet feeder while cleaning my workshop. I decided to pick up suet, on my next food shopping trip, and give it a try. At least for the winter. For a mere $1.29/lb, I have had an incredible payback in viewing pleasure.

I hung it off a corner of the pergola so that I could see it from a nearby door. For a long time now, I have had 3 Black Oil Sunflower seed feeders and 1 Thistle seed feeder hanging 20 ft away under a large paper white clump birch.

It took several days before I began to see Downy Woodpeckers feeding on the suet. They had always been fairly frequent feeders at the sunflower feeders. But now they were lingering on the suet feeder. And they were climbing/hopping around the feeder, on the bracing of the pergola.

Even though I have always seen Downy Woodpeckers around my feeders I found I could observe them more on the suet. Sometimes a little too much.

One day in early spring I was walking past the suet feeder, I visually followed a woodpecker as it flew up into a honey locust. I was on my way to the truck parked under the locust tree. Since I had long ago determined that I am unable to walk and chew gum, I do not know why I thought I could walk to my truck and simultaneously track a woodpecker in the trees. I soon found myself face down on the pea stone driveway with some good scrapes and bruises to remind me of my folly. While I was following the woodpecker I had walked directly into a rock border surrounding one of the hosta display beds! 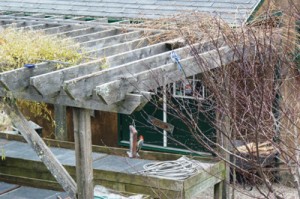 I chose the pergola for suspending the suet feeder because of the location. But I subsequently read that woodpeckers love a nearby large tree (as close as 2-3 feet) to hop around on because they feel more secure around the feeder.

Our pergola happens to beconstructed of rough cut lumber. This roughness aids them in clinging to the surface. I soon realized that the framing of the pergola allows more woodpeckers to queue up for their turn at the suet. Other birds like to take an occasional bite of suet. Chickadees, Tufted Titmouse, Nut Hatch, Starlings and Blue Jays were also taking the suet as part of their diet. All year round. Although more so in the colder weather. Woodpeckers eat far more suet year round than the other birds. Because woodpeckers feed less at the seed feeders than other species, the nearby suet feeder is a way to enjoy viewing more woodpeckers and with far greater frequency.

Jean and the Red-Headed Woodpecker 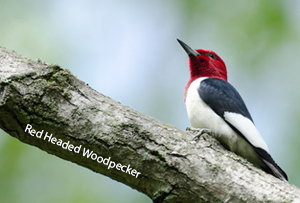 During the growing season here, the benches under the pergola contain hardy ferns and other hosta companion plants. One day in June, Jean was working under the pergola when a much larger woodpecker started coming down from the adjacent birch to make a quick grab of suet. Then it would return to the birch or sometimes a larger nearby oak.

In the trees it would make itself invisible to us from below by hopping to the back of limbs or hiding in foliage. The screeching sounds coming from the tree were like nothing I had heard before. The closest bird sound to anything I have heard would be to that of the Blue Jay. The sounds were much louder and menacing than any sounds I have heard from the jays. It seemed like it was telling Jean and myself to back off so that it could feed on the suet that was just feet away from us. It turned out to be a Red Headed Woodpecker. For better or worse he only made appearances for a week or two before we stopped seeing him.

By the end of summer the number of Downy and Hairy Woodpeckers were so numerous that at times it looked like Grand Central Station.around the suet feeder. I finally determined that it was the offspring following the adults to the feeder. Around this same time the offspring started appearing in the rafters of our retail building. PJ determined that when the juvenile woodpeckers flew away from the feeder area, they were not always getting enough elevation to make it over the retail building and up into the honey locust.The young woodpeckers would only be in the rafters a few hours before they found their way back out through the open double doors. This lasted for a number of weeks before the population started to recede to the more typical volume. Evidently the offspring moved out looking for their own territory. 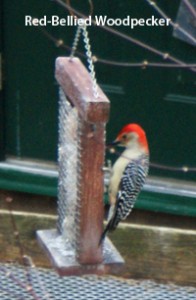 I still had not seen one at my suet feeder. It was mid to late October before the newest woodpecker appeared. He was furtive at first but over time seemed to accept our presence more and more. The Red-bellied Woodpecker is at the feeder on a regular basis now and is much showier than the Downy and Hairy woodpeckers. He talks when he is 70 feet up over head in the red oaks but at the suit feeder he is extremely well behaved and seems to prefer early in the day to feed on suet.

So far this year there have been the four species of woodpeckers visiting the suet feeder. I am hoping that over time we will have other species as well.

Thank you to Sherri! 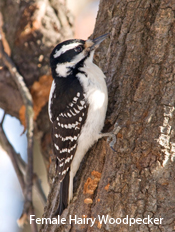 Sherri works here several days a week helping customers with their hosta selections. She has extensive gardens at her home and feeds the birds as a part of enjoying the gardening experience. It was Sherri that advised me to leave the suet feeder up year round. If I had not, I would not have seen the population explosion of woodpeckers when the offspring followed the adults to the feeder. Sherri also tells me that mixing birdseed in with the suet only encourages squirrels. From time to time the gray and red squirrels are eating up a fair percentage of the black oil sunflower seed. They also disrupt the birds feeding at the sunflower feeders. But I have yet to see a squirrel on the $1.29/lb suet filled feeder.

There is woodland bordering us here on two sides. As a natural part of the forest ecology there are always some dead decaying trees and large dead limbs in the otherwise healthy trees, These are needed by the woodpeckers for both food and shelter. Periodically we hear them pecking out a new hole or enlarging an existing opening in these decaying limbs.

Some of you may remember my talking about the Pileated Woodpecker that was vocalizing as I was recording a video on organically controlling voles in the garden. PJ suggests the next project be a suet feeder for the much larger Pileated Woodpeckers. It needs to be at least 10 feet off the ground in a large tree. I plan on placing it in the red oaks that border our parking lot. I envision a feeder that can be changed with a pole to avoid using a ladder. I will let you know what happens with that project. The prospect of getting more glimpses of the huge woodpecker should spur us on.